Everybody Benefits from Great Public Schools 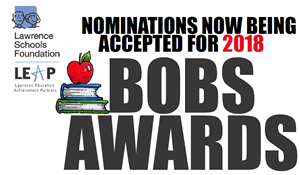 Nominations are being accepted for the most prestigious teaching award provided through the Lawrence Schools Foundation. Community members, parents, students, alumni and fellow teachers are encouraged to submit a nomination of a Lawrence Public Schools teacher for the annual $10,000 Bobs Award.

Nomination letters could touch on the dedication of the nominee, leadership ability, relationship with parents and school community, and dedication to individual student achievement and success.

Nominations, which can be e-mailed to djohnsto@usd497.org, are due to the Lawrence Schools Foundation Monday, April 30 by 5 p.m.

History of the Award

Twenty one years ago a group of civic leaders who share the same first name of Bob, created the award through the Foundation. The benefactors choose to remain anonymous to focus attention on the outstanding educators selected annually to receive the award.

“This Bob is honored to be a part of a group like this,” one of the anonymous Bobs said. “I am always so proud of the winner every year. This award is a great tribute to the guys who started it. They had a vision and now it has been going for a couple of decades.”

The Bobs Award honors a teacher who “exemplifies extraordinary instruction skills; reflects commitment to quality education and dedication to teaching; focuses on individual student achievement; administers to the whole child, guiding each student to achieve his full potential; and is deemed to be proficient, caring, adaptable, and professional.”

“At the Lawrence Schools Foundation, we have the privilege of working with hundreds of donors whose generosity makes our work possible,” said Dena Johnston, executive director of the Foundation. “Building stronger communities doesn’t just happen. It requires the efforts of many – each bringing their own unique talents, insights, strengths, abilities and willingness to make a difference. Our generous donors, with deep roots in our local community, such as the Bobs, allows us to further enrich student experiences and reward teacher excellence in such a powerful way.”

        
USD 497 is an equal opportunity employer and will not discriminate in its employment, admissions, placement, recruitment and educational practices and policies. Discrimination against any individual on the basis of race, color, religion, sex, age, national origin, disability, sexual orientation or gender identity is prohibited by Lawrence Board of Education Policy.
Copyright © 2002-2020 Blackboard, Inc. All rights reserved.